a rare bit of hollywood glamour for me

Bridget's back... and as an expectant singleton she may be settling down. But how grown-up are the film's stars? 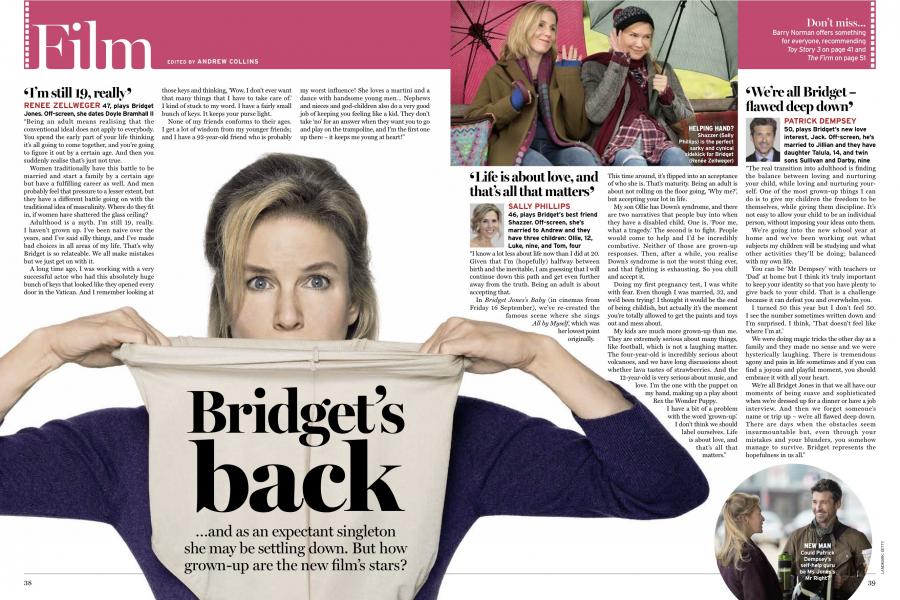 She is single and has no children.

Being an adult means realising that the conventional ideal does not apply to everybody.

You spend the early part of your life thinking it's all going to come together, and you're going to figure it out by a certain age.

And then you suddenly realise: that's just not true.

Women traditionally have this battle to be married and start a family by a certain age but have a fulfilling career as well.

And men probably feel that pressure to a lesser extent, but they have a different battle going on with the traditional idea of masculinity. Where do they fit in, if women have shattered the glass ceiling?

I'm still 19, really. Adulthood is a myth. The only thing that changes as you get older is that you might have a mortgage or a young family or you might care for older relatives.

People depend on you, and you've got to show up. And that's great - bring it on, because that's about love.

I haven't grown up. I've been naive over the years, and I've said silly things, and I've made bad choices in all areas of my life.

That's why Bridget is so relatable. We all make mistakes but we just get on with it.

A long time ago, I was working with a very successful actor who had this absolutely huge bunch of keys that looked like they opened every door in the Vatican.

And I remember looking at those keys and thinking, 'Wow, I don't think I ever want that many things that I have to take care of'.

And I kind of stuck to my word. I have a fairly small bunch of keys. It keeps your purse light.

None of my friends conform to their ages.

I get a lot of wisdom from my younger friends; and I have a 92-year-old friend who is probably my worst influence! She loves a martini and a dance with handsome young men…

Nephews and nieces and godchildren also do a very good job of keeping you feel like a kid.

They don't take 'no' for an answer when they want you to go play on the trampoline.

I'm the first one up there and it keeps me young at heart. 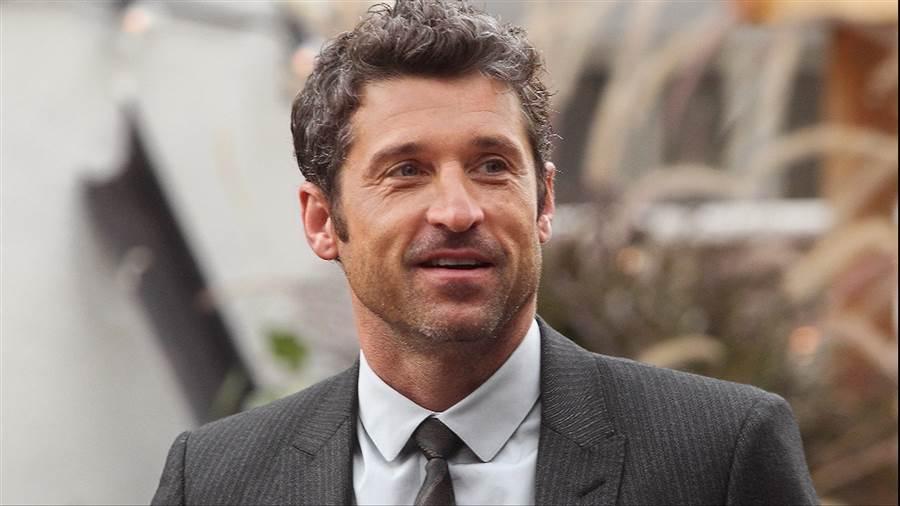 He is married to Jillian and they have daughter Talula, 14, and twin sons Sullivan and Darby, nine.

One of the most grown-up things I can do is to give my children the freedom to be themselves, while giving them discipline.

It's not always easy to allow your child to be an individual person, without imposing your ideas onto them.

We're just going into the new school year at home and we've been working out what subjects my children will be studying and what other activities they'll be doing; balanced with my own life.

You can be 'Mr Dempsey' with teachers or 'Dad' at home but I think it's truly important to keep your identity so that you have plenty to give back to your child.

That is a challenge because it can defeat you and overwhelm you.

For me, motor racing is replenishing. It's a bit selfish, but when you get it out of your system, you're much more present as a parent.

I turned 50 this year but I don't feel 50. I see the number sometimes written down and I'm surprised. I think, 'That doesn't feel at all where I'm at'.

We were doing magic tricks the other day as a family and they made no sense and we were hysterically laughing.

There is tremendous agony and pain in life sometimes and if you can find a joyous and playful moment, you should embrace it with all your heart.

I think we're all Bridget Jones in that we all have our moments of being suave and sophisticated because we're dressed up for a dinner or we have a job interview and we've prepped really well.

And then we say something silly or we forget someone's name or we trip up and we're all flawed deep down.

There are days when the obstacles seem insurmountable but somehow, even through your mistakes and your blunders, you somehow manage to survive.

Bridget represents the hopefulness in us all. 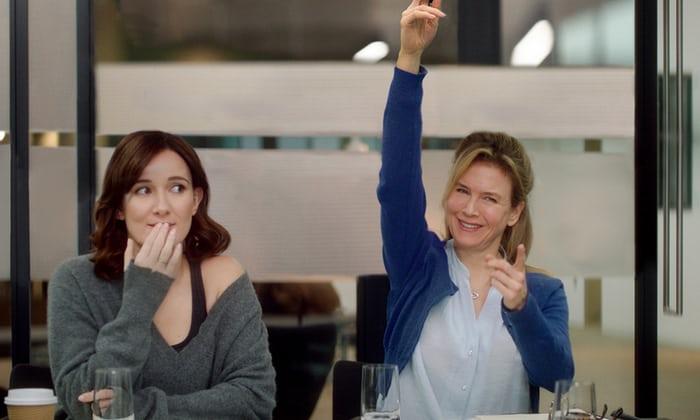 She is married to Daniel Ingram and they have a daughter, Soraya, who is nearly three years old.

I absolutely take my work seriously, but I live for having fun.

If I meet a new person who makes me laugh, I say, 'Right, you're one of my best friends now', and that's totally non-negotiable. I don't need their consent.

The other day, I was walking down the street on a really hot day, and a dog inside a cafe had pressed his backside to the window to cool himself down on the cold glass.

The dog heard us laughing and looked so embarrassed, like he knew he shouldn't be pressing so intimately on that public window pane.

You have to keep looking for the funny in life.

My character in Bridget Jones's Baby is her new best friend Miranda. I get up to all sorts of mischief: I put her on Tinder and take her to a music festival.

Then Bridget finds out she's pregnant and everything changes.

So much of society's idea of growing up is linked to parenthood, and that's what this film explores.

I have a two year old daughter and having a kid definitely does make you feel grown-up. Especially when someone calls you 'Soraya's mum' and you don't even have a name. That's odd.

And there are other things that make you feel grown-up.

My gynaecologist put a camera up me and told me I had to stop smoking and put the image on screen to show me these pre-cancer cells.

That was quite an adult moment. I don't smoke any more.

But I generally try and avoid the grown up things if I can.

Sometimes in life we mistake wisdom and truth with maturity or adulthood, but they're not the same thing.

In recent political times, we've seen an alarming thing, which is that our elders don't know what they're doing.

So I don't associate adulthood with wisdom. Often you find the truest words and the kindest hearts in student populations.

I'm inspired by the people I work with at the National Youth Theatre who haven't got a jaded sense of the world, who don't worry about being thin or getting auditions.

They're so full of zest and they are putting films online and working hard.

Most women these days have lots of responsibility, and work really hard, but are still really playful and manage to be kids in their social time.

I think that panicking, original Bridget Jones is disappearing. It's not a defining feature of women I know.

We're just encouraging each other to relax. And our metric for having a good life, is to have fun. 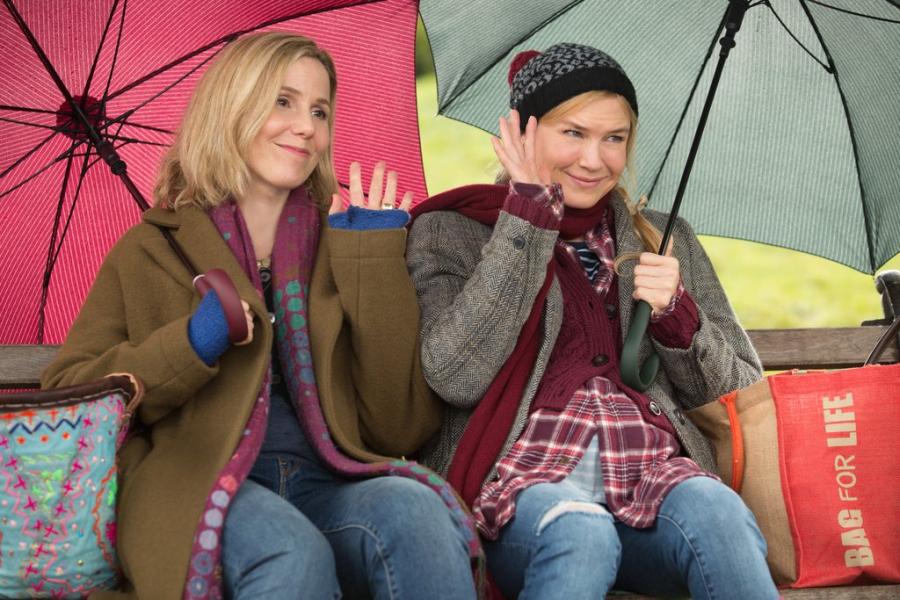 She is married to Andrew and they have three children: Ollie, 12, Luke, nine, and Tom, four.

I know a lot less about life now than I did at 20. Given that I'm (hopefully) halfway between birth and the inevitable, I am guessing that I will continue down this path and get even further away from the truth.

And I think being an adult is about accepting that.

In Bridget Jones's Baby, we've recreated the famous scene where she sings All By Myself, which was her lowest point originally. This time around, it's flipped into an acceptance of who she is.

I think that's very mature. Being an adult is about not rolling on the floor going, 'Why me?', but accepting your lot in life.

My son Ollie has Down's Syndrome, and there are two narratives that people buy into when they have a disabled child.

One is, 'Poor me, what a tragedy'. The second is to fight. People would come to help and I'd be incredibly combative. Neither of those are grown-up responses.

Then, after a while, you realise Down's Syndrome is not the worst thing ever, and that fighting is exhausting. So you chill and accept it.

Doing my first pregnancy test, I was white with fear. Even though I was married, 32, and we'd been trying!

I thought it would be the end of being childish, but actually it's the moment you're totally allowed to get the paints and toys out and mess about.

I'm the one with the puppet on my hand, making up a play about Rex the Wonder Puppy.

Some new friends came to stay with us for the first time recently. I bought loads of posh food, and tried to clean the bogies off the bathroom.

My friend confessed she'd done exactly the same when we went to stay with them. It makes me laugh that everyone's pretending they don't live like pigs!

So we made a pact that next time, we're only going to eat pasta pesto in each other's houses.

Everyone has a messy house sometimes. It is completely normal to fart. Everyone makes food that goes wrong.

I have a bit of a problem with the word 'grown-up'. I don't think we should label ourselves. Life is about love, and that's all that matters.