43AD: WHEN BRITS LOVED BOOZING, FIGHTING AND TATTOOS (BIT LIKE NOW THEN) 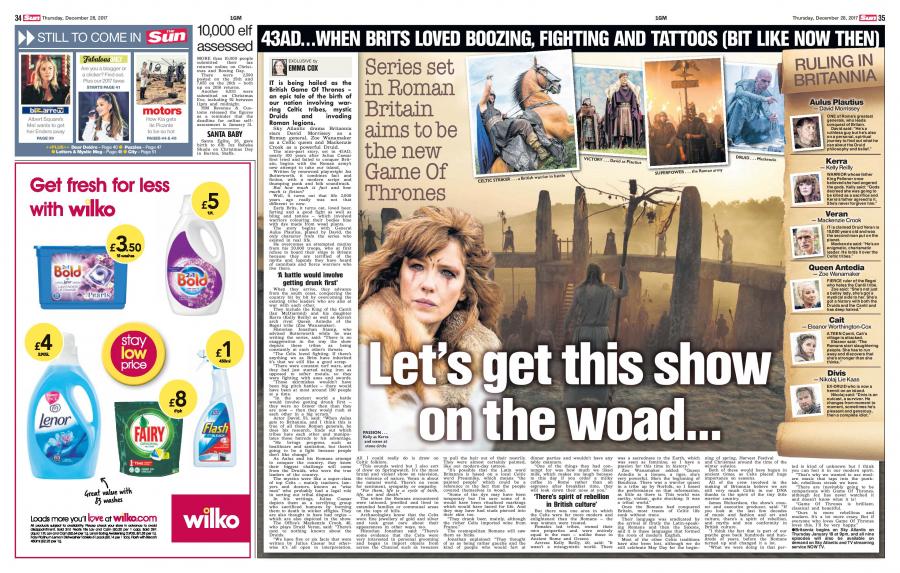 IT is being hailed as the British Game Of Thrones — an epic birth-of-a-nation tale featuring warring Celtic tribes, mystic Druids and invading Roman legions.

The nine-part story, set in 43AD, nearly 100 years after Julius Caesar first tried and failed to conquer Britain, begins with the Roman army's latest attempt to tame the mysterious island on the empire's northern fringe.

Written by renowned playwright Jez Butterworth, it combines fact and fiction, with a modern script and thumping punk and folk soundtrack.

But how much is fact and how much is fiction? Well, it turns out that life 2,000 years ago really was not that different to now.

Early Brits, it turns out, loved beer, farting and a good fight as well as bling and tattoos — which involved warriors colouring their bodies blue with dye made from woad plants. 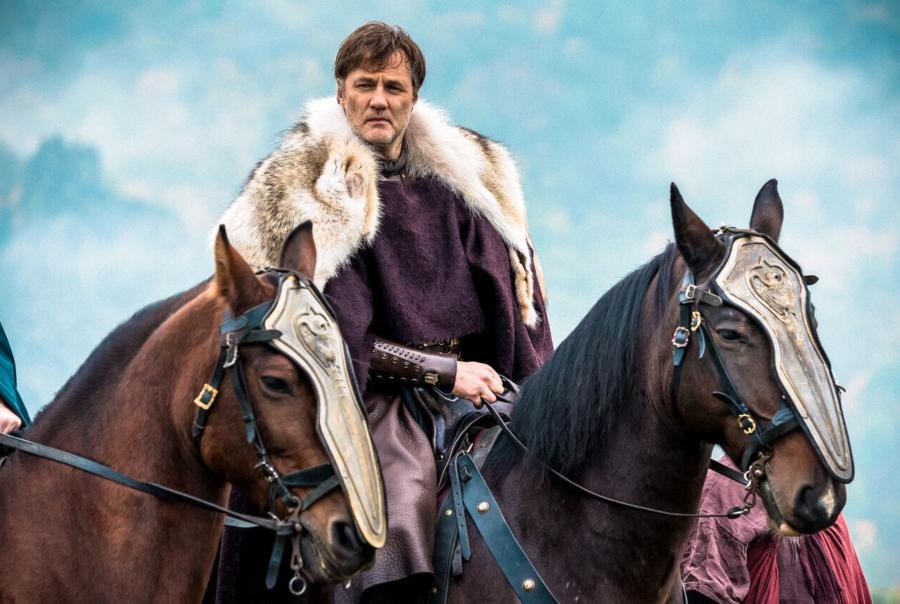 The story begins with General Aulus Plautius, played by David, the only character from the series who existed in real life.

He overcomes an attempted mutiny from his 20,000 troops, who at first refuse to board their ships to Britain because they are terrified of the myths and legends they have heard of cannibals and fierce warriors who live there.

When they arrive, they advance from the south coast, conquering the country bit by bit by overcoming the existing tribe leaders who are also at war with each other.

They include the King of the Cantii (Ian McDiarmid) and his daughter Kerra (Kelly Reilly) as well as Kerra's arch rival Queen Antedia of the Regni tribe (Zoe Wanamaker).

Historian Jonathan Stamp, who advised Butterworth while he was writing the series, said: "There is no exaggeration in the way the show depicts these tribes as being constantly at each other's throats.

"The Celts loved fighting. If there's anything modern Brits have inherited it's that they still like a good scrap.

"There were constant turf wars, and they had just started using iron as opposed to softer metals, so they were fighting with axes and swords.

"Those skirmishes wouldn't have been big pitch battles — there would have been at most around 100 people at a time.

"In the ancient world a battle would involve getting drunk first — they were no braver then than they are now — then they would rush at each other in a big scrum."

Actor David, 53, said: "When Aulus gets to Britannia, and I think this is true of all those Roman generals, he does his research, finds out which tribes hate each other and manipulates those hatreds to his advantage.

"He brings progress, such as healthcare and sanitation, but there's going to be a fight because people don't like change." 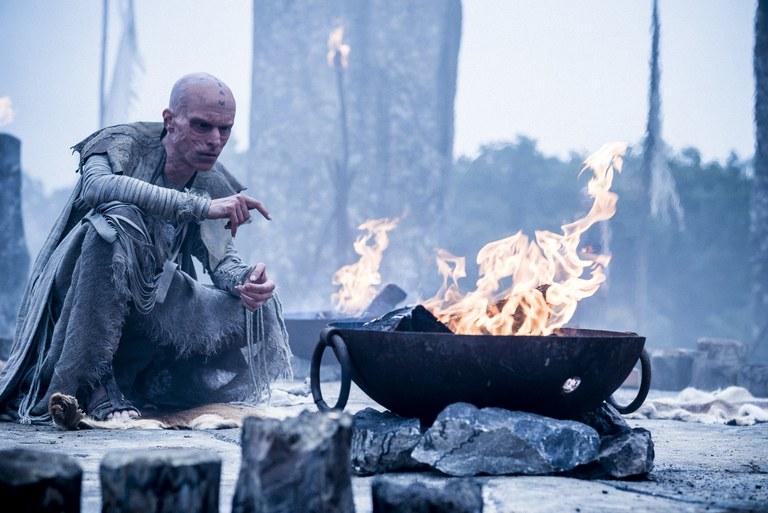 As Aulus and his Romans attempt to conquer the country, they know their biggest challenge will come from the Druids, who were the true leaders of the country.

The mystics were like a super-class of top Celts — mainly teachers, lawyers and doctors, known as "wise men" who probably had a legal role in sorting out tribal disputes.

The Office's Mackenzie Crook, 46, who plays Druid Veran, said: "There's next to nothing known about the Druids.

"We have five or six facts that were written by Julius Caesar but otherwise it's all open to interpretation.

All I could really do is draw on Celtic folklore.

"This sounds weird but I also sort of drew on Springwatch. It's the most brutal and violent show on television, the violence of nature. Veran is about the natural world. There's no room for sentiment, sympathy or empathy.

"For them, life is a cycle of birth, life, sex and death."

The tribes the Romans encountered were tattooed, jewelled and lived in extended families or communal areas on the tops of hills.

Archaeologists know that the Celts wore fine jewellery of gold and silver and took great care about their appearances in other ways, too.

Historian Jonathan said: "There's some evidence that the Celts were very interested in personal grooming and began to import objects from across the Channel such as tweezers to pull the hair out of their nostrils. They were almost certainly painted, like our modern-day tattoos.

"It's possible that the Latin word Britannia is based on a local Celtic word Preannike, which means "the painted people" which could be a reference to the fact that the people covered themselves in woad.

"Some of the dye may have been temporary but I'm sure some of it would have been ritualised markings which would have lasted for life. And they may have had studs pierced into their skin too.

"They drank beer, mainly, although the richer Celts imported wine from France."

The cosmopolitan Romans still saw them as hicks. Jonathan explained: "They thought of Celts as being rather gauche and the kind of people who would fart at dinner parties and wouldn't have any table manners.

"One of the things they had contempt for was how much we liked milk, which makes me laugh because to this day if you order a milky coffee in Rome rather than an espresso after breakfast time, they will look down their nose at you."

But there was one area in which the Celts were far more modern and enlightened than the Romans — the way women were treated.

Females led tribes, owned their own properties and were entirely equal to the men — unlike those in Ancient Rome and Greece. 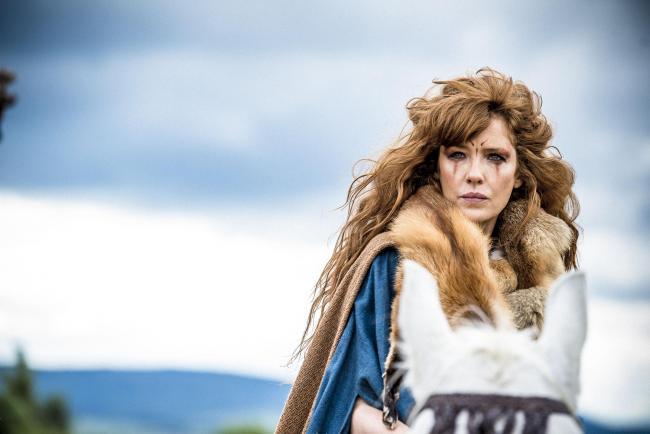 Actress Kelly Reilly, 40, said: "It wasn't a misogynistic world. There was a sacredness to the Earth, which was seen as feminine, so I have a passion for this time in history."

Zoe Wanamaker added: "Queen Antedia is a lioness, a tiger, she's very powerful. She's the beginning of Boudicca. There was a warrior queen in a tribe up by Norfolk, so I based the performance on that information, as little as there is. This world was earthy, violent, quite shocking. It was a tribal world."

Once the Romans had conquered Britain, most traces of Celtic life sunk without trace.

Their language was eradicated by the arrival of firstly the Latin-speaking Romans and then the Saxons, and it is these languages that formed the roots of modern English.

Most of the other Celtic traditions in Britain have also been lost, although they do still celebrate May Day for the beginning of spring, Harvest Festival and Christmas around the time of the winter solstice.

Both of these would have begun in ancient times, as Celts placed huge importance on seasons.

All of the crew involved in the making of Britannia believe they are still very much Celtic in their DNA thanks to the spirit of the tiny little warrior country.

James Richardson, the show's creator and executive producer, said: "If you look at the last few decades of music and fashion and art and culture, there's a spirit of rebellion, and myths and non-conformity in British culture.

"I think the fact that is part of the psyche goes back hundreds and hundreds of years, before the Romans turned up and changed it a lot.

"What people were doing in that period is kind of unknown but I think you can feel it in the country's modern spirit.

"That's why we wanted to use modern music that taps into the punkish, rebellious streak the British have.

"There are inevitably going to be comparisons with Game Of Thrones, although Jez has never watched it and doesn't know what it is!

"Game Of Thrones is brilliant, classical and beautiful.

"Ours is more rebellious and modern. It's a lot more crazy. But if everyone who loves Game Of Thrones loves this, I'll be very happy."

BRITANNIA begins on Sky Atlantic on Thursday, January 18 at 9pm, and all nine episodes will also be available on TV streaming service NOW TV.